Best Drill Interceptions In The Metals Mining Sector For The Week Ended October 11, 2020

by eNews Pal
in Business
0 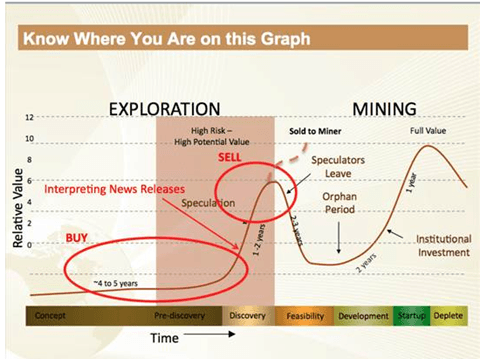 If you’re into investing in the mining sector, you should know the above chart very well. This series covers the three projects with the most significant drill interceptions over the past week as well as the prospects of the companies which own these projects. I will use data from the weekly bulletin of opaxe, which can be found on its website. Note that the drill interceptions are converted into grades of gold equivalents using the following formula:

Where AuEq (g/t) is the gold-equivalent grade, z is the number of listed components (e.g. Au, Ag, Pb, Cu, Zn, Li2O, Sn, Co, etc.), ρn and Vn are the mass concentration and market value of the nth component in the list, respectively, and V Au is the market value of gold.

Gold has been chosen as the metal equivalent for all conversions as it is the most widely-used and best-understood benchmark to determine or appreciate the grade tenor of a drilling intercept. – opaxe

On October 5, Osisko Gold Royalties (OR) released results from the definition and expansion drill program at its Cariboo property and the best interception was 0.5m @ 6,530g/t Au from 118.9m in hole CM-20-018. This is equal to 3,265(AuEq.)m and was drilled at the Cow Mountain deposit. 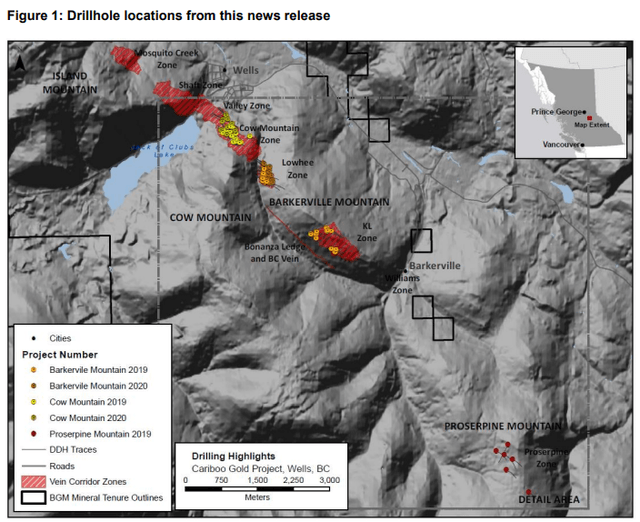 Osisko Gold Royalties plans to spin out Cariboo in a reverse takeover deal with Barolo Ventures (OTC:RNGTF). The transaction also includes some minor projects and a portfolio of marketable securities valued at some $C116 million ($88 million).

The resulting company will be named Osisko Development and will undertake a C$100 million ($76 million) equity offering to fund project development.

Cariboo is located in British Columbia and it currently holds 2.9 million ounces of gold in the measured and indicated categories. 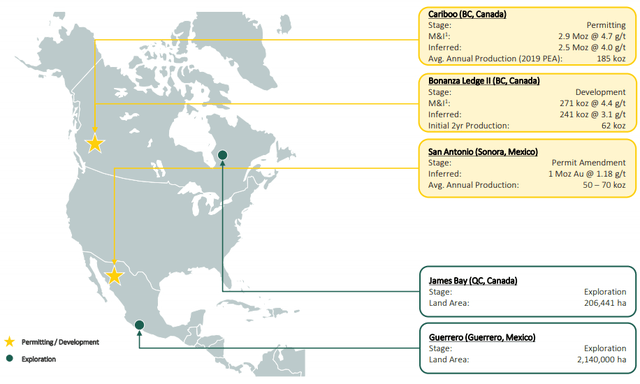 A feasibility study on the project is expected to be ready in the second half of 2021 and permits should be obtained sometime in 2022. 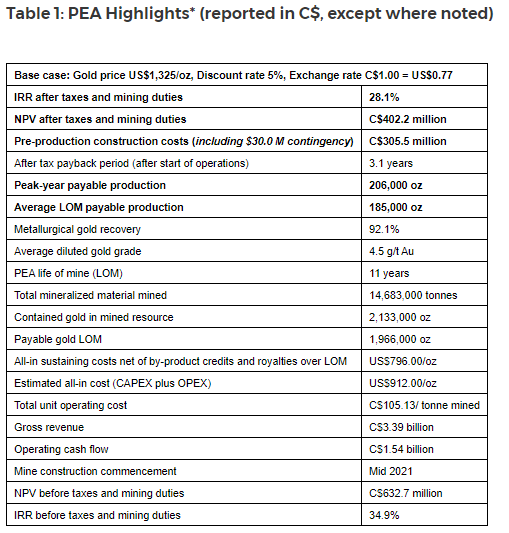 The feasibility study will explore an increase of throughput from 4,000 to 4,750 tpd with an option to expand further.

On October 7, Osisko Mining (OTCPK:OTCPK:OBNNF) released a new batch of results from the ongoing definition and expansion drill program at its Windfall Lake project, and the best interception was 2.4m @ 391g/t Au from 783.6m in hole OSK-W-20-2133-W2. This is equal to 938(AuEq.)m, and the hole was drilled at the Triple Lynx zone. 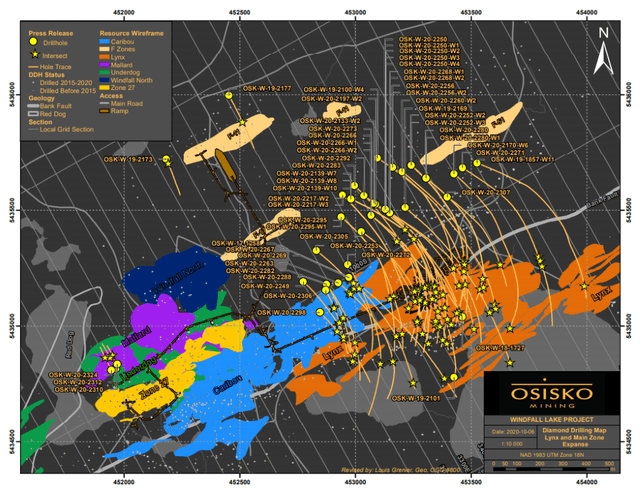 Windfall Lake is located near the Val-d’Or and Chibougamau projects in Québec and is oneof the highest-grade gold projects in Canada: 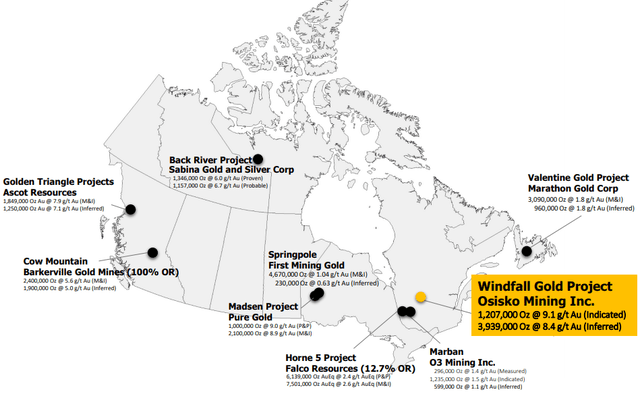 Around a million meters have been drilled so far on the property, but the project remains open up and down plunge, and it currently contains more than five million ounces of gold across the indicated and inferred categories at a 3.5g/t cut-off grade. 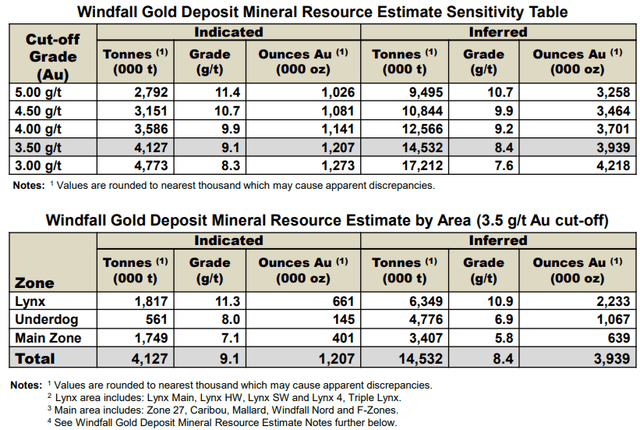 Windfall is not a new project, and I’m really impressed how fast resources have been growing since Osisko got its hands on it. As you can see, several past owners barely found anything here. 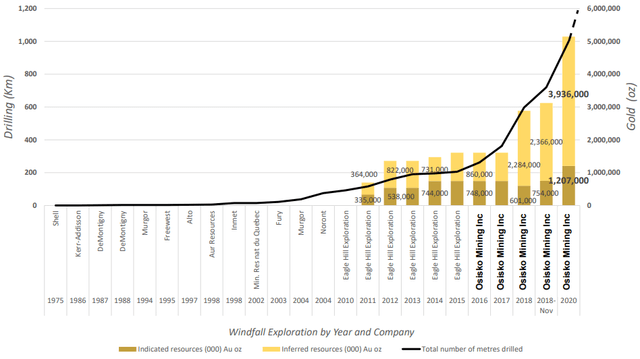 In 2018, Osisko released a Preliminary Economic Assessment for Windfall, and I think the next resource estimate will significantly improve the financials. 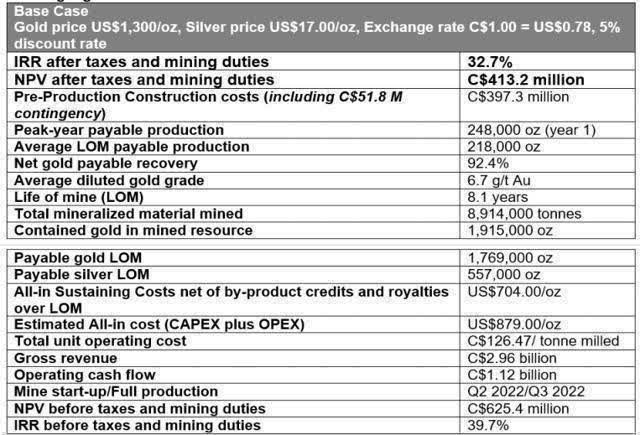 Osisko is looking at a feasibility study for Windfall, and I think the project could enter the construction phase in around two years. 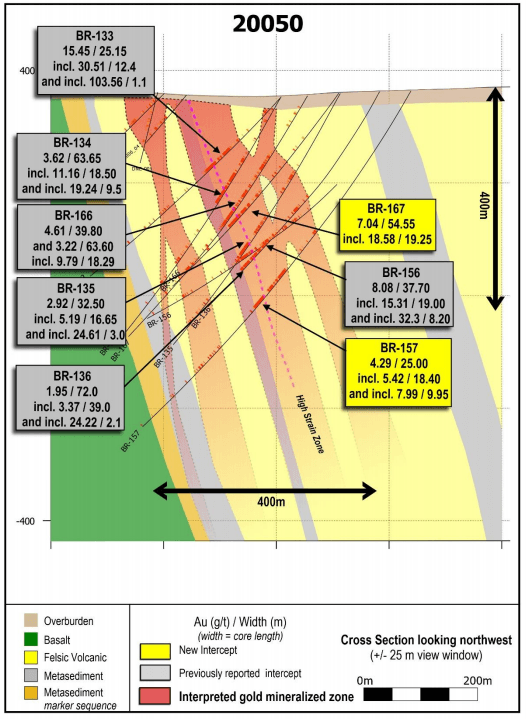 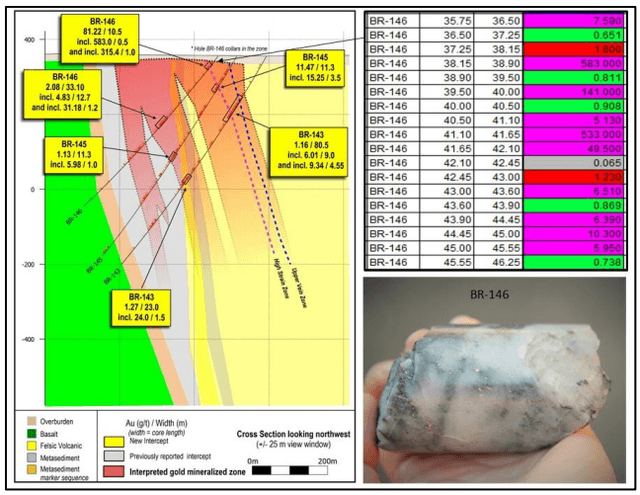 Dixie is located close to the Red Lake and Madsen gold projects and the Red Lake mining district has produced more than 30 million ounces of gold to date: 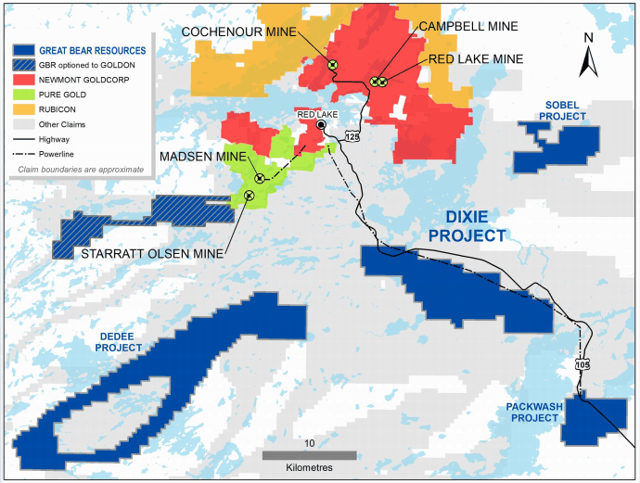 This is an early stage project but recent drill results have proved that it could be a Tier 1 deposit which is comparable with the likes of Hemlo, Red Lake and Canadian Malartic.

I think Cariboo is a very good gold project with relatively low initial capex. The upcoming feasibility study is likely to contain better financials as planned throughput is set to increase by almost a fifth.Osisko Gold Royalties values the assets that it plans to give Osisko Development at C$750 million ($480 million) and I think the latter has the potential to become a gold major.

As I’ve mentioned several times on SA, Osisko Mining is one of my favorite exploration-stage gold mining companies and I think Windfall is rapidly turning into a Tier 1 asset. The latter is among the most compelling gold projects in Canada and it could be in production in about three years. I think Osisko Mining looks like one of the best takeover targets in the gold sector.

Great Bear’s Dixie project still doesn’t have a resource but I think it can be considered a Tier 1 gold project. The company is currently conducting one of the largest exploration programs in Canada, a total of 110,000 meters and over 300 holes. I think Great Bear is undervalued and could be bought out by a major gold producer in the near future.

Disclosure: I/we have no positions in any stocks mentioned, and no plans to initiate any positions within the next 72 hours. I wrote this article myself, and it expresses my own opinions. I am not receiving compensation for it (other than from Seeking Alpha). I have no business relationship with any company whose stock is mentioned in this article.

Additional disclosure: I am not a financial adviser. All articles are my opinion – they are not suggestions to buy or sell any securities. Perform your own due diligence and consult a financial professional before trading.

Editor’s Note: This article covers one or more microcap stocks. Please be aware of the risks associated with these stocks.